Two brave road marking operatives from L&R Roadlines have been praised by police after they chased a robber who attacked an elderly man in St Helens town centre last week.  The mugger is believed to have assaulted the elderly victim on Hardshaw Street, St Helens, before attempting to make off with his bag, which contained cash.  Two employees of L&R Roadlines, who witnessed the incident, chased the offender and recovered the victim’s cash.

Lewis Burns, 24, and Ross Miller, 34, were waiting to receive some paperwork from St Helens council offices when they spotted something happening which at first, they thought it was simply two men having a disagreement.  Unfortunately, an elderly victim was being assaulted by a mugger who then made off with a bag.

Lewis and Ross, road marking operatives for L&R Roadlines – whom carry out contracting work on road repairs, markings and safety surfacing for St Helens Council – then chased the offender.

“It all happened so fast, next thing one man went to the floor and we realised he was being mugged” Lewis began. “We had already started to get out the cabin but as soon as we realised what was happening it was almost instinct to chase after the man who was running away with the bag.  To be fair to them a few people around us started to chase as well but it was us that caught up with him. We said, ‘you’ve robbed him’ and he just dropped the bag and ran off.”

It was only afterwards that Lewis and Ross realised what they had done, that the assailant could have been armed and the danger they had potentially put themselves in.  After going back to the elderly victim, giving him back the bag and helping him to his feet, it turned out the elderly victim had in fact been on his way to buy a car and there was a considerable amount of cash in the bag.  The victim received treatment for minor injuries.

L&R Roadlines began collaborative working with major contractors and local government authorities in the Liverpool region during the late 1970s and has since become one of the largest and most trusted road markings, road safety surfacing and road repair contractors in the UK.  A spokesperson for the company said, “We are very proud of all of our road marking operatives and the high standards of work they produce.  As a company we have always been keen to give back to the local area by supporting local businesses and schools.  But what Lewis and Ross did last week is way above that by carrying out such a brave act.”

Below: A clipping from the local St Helens Star newspaper where Lewis and Ross made the second page 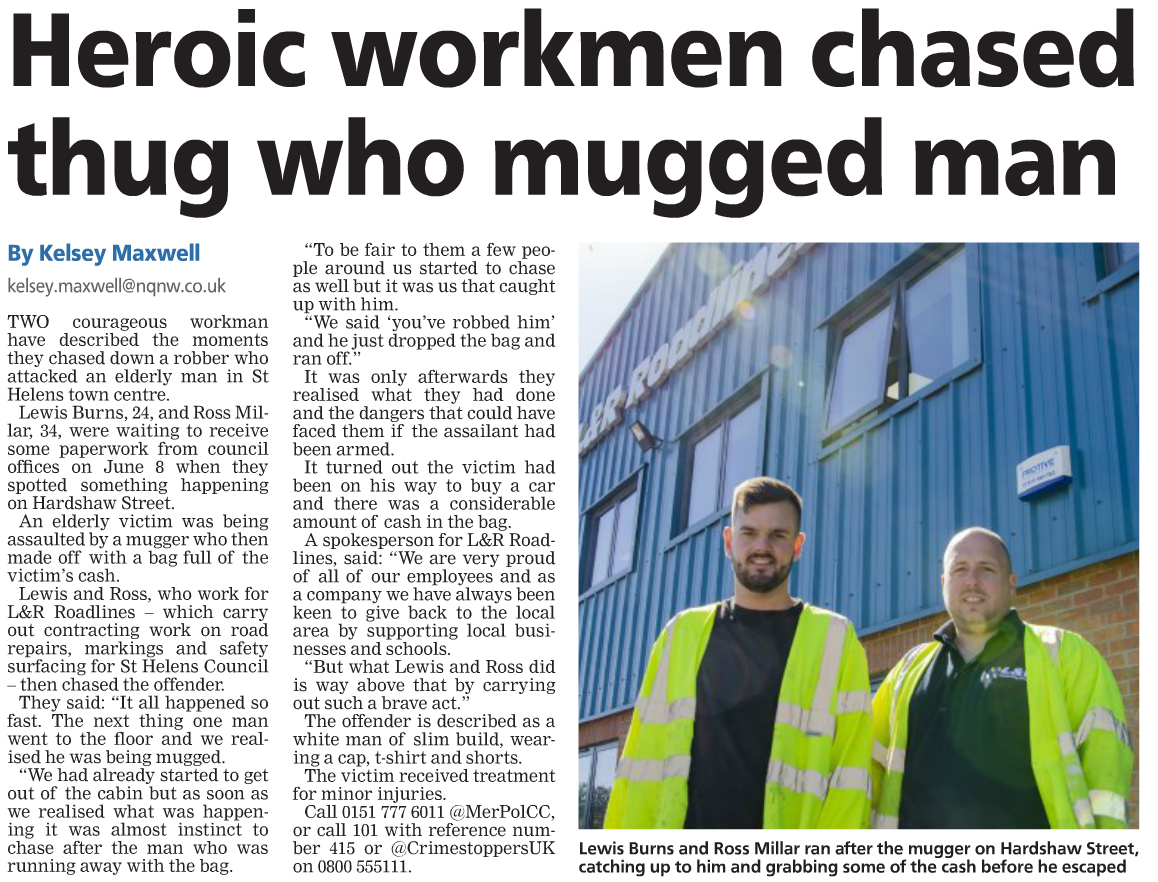