The UK’s premier road marking vehicle and equipment manufacturer, Somerford Equipment, has joined forces with neighbouring businesses to install a potentially lifesaving automated defibrillator unit (AED) at their site in Sandbach, Cheshire that is available to employees, visitors or the general public.

Every year in Britain approximately 30,000 people are struck by sudden cardiac arrest whilst outside of hospital environments.  Around 80 percent happen at home and 20 percent occurring in public places like work or schools.  It is in these public places that the victim is at the most risk of death due to the lack of AEDs in proximity.  Figures from the British Heart Foundation show that:

The evidence is there that defibrillators make all the difference following sudden cardiac arrest, but more still needs to be done to increase awareness.  Nationwide there has been a push from businesses such as Somerford and their neighbours James Lynch & Sons Ltd and XL Engineering Trading Ltd.  Michael Oakes, Director of Somerford Equipment stated, “Somerford were already making enquiries with the North West Ambulance Service as to which AED’s would be compatible with current emergency services equipment.  At this point we were contacted by James Lynch and Sons and XL Engineering regarding installing a public AED central to all three sites and the rest of the busy industrial area.  We decided to share the cost of the AED between us, with Rebecca Edwards (James Lynch and Sons) and Shirley Dowding (Somerford) working together until the AED was installed outside the gates of Somerford in early June.”

On Tuesday 19th June, a full training session was carried out with first aid trained staff from Somerford by Adam Rooney from Peers & Rooney Training.  Adam has over 30 years’ experience in leading courses, beginning in the armed forces in 1992 before starting to deliver first aid courses with Peers & Rooney in 2011.  “Delivering courses such as this can potentially save lives and we need to see more and more companies actively supporting the installation of AEDs.  With having a defibrillator on site, you can hugely increase the percentage rate of survival as the non-normal rhythm of the heart is shockable.”

The training course focused on the operation of the AED but also included refresher training on casualty assessment, CPR and how to incorporate both into the AED process.  The CPR ‘dummies’ on which practical training is carried out are fitted with Bluetooth technology allowing the trainer real time access to the efficiency statistics of the CPR being carried out, ensuring that optimum techniques are learned.  The AED issues voice prompts as soon as switched on and, whilst designed to be used easily by everyone – trained or otherwise – familiarity with the equipment promotes confidence and the ability to work quickly to get the AED assessing the casualty at the earliest opportunity.  Following this intensive training session, a further session was held for all remaining staff on site. This session covered familiarisation with the AED location and access, the equipment that can be found inside the cabinet, followed by a demonstration of CPR and operating the AED.

Kevin Harrop, Director of XL Engineering added, “With approximately one hundred businesses in such a small area and thousands of people passing through the area on a daily basis it is great to see the equipment installed.  The relative cost of the AED equipment and training is nothing compared to potentially saving a life.”  The British Heart Foundation have joined forces with the UK Ambulance services, the NHS and Microsoft to deliver a ground breaking National Defibrillator Network which should hopefully be released in 2019 and the plans are in place to add the installed AED onto the network as soon as it is up and running.  Upon completion of the training day, Michael Oakes from Somerford expressed what the unit meant to the business, “It has been fantastic seeing all of the staff get involved and realise how important the AED could be.  We hope that the installation of the equipment leads the way for other businesses to invest in such an important, lifesaving, piece of equipment that is available to both our workforce and the public.” 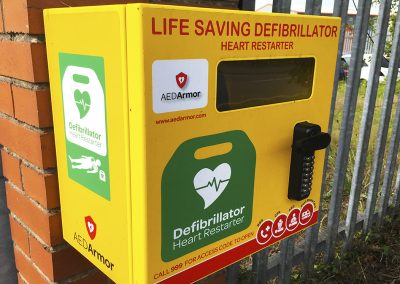 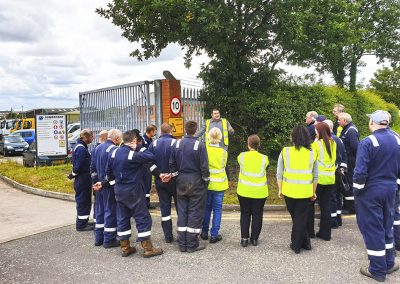 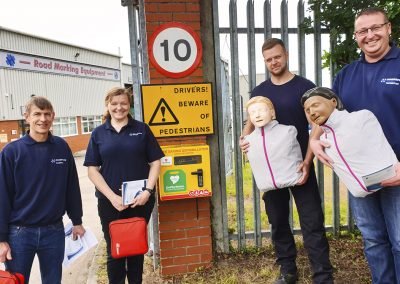 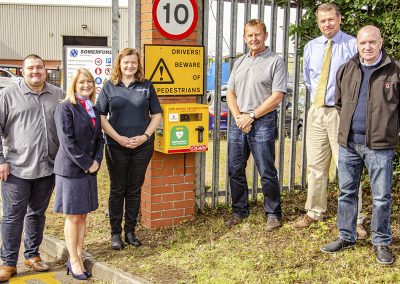